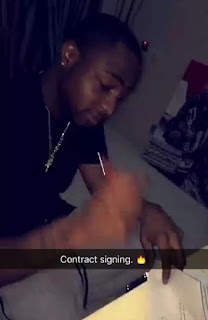 Some weeks back, he signed a new artist named "Mayorkun" after he had gushed so much about his talent. DAVIDO even boasted that Mayorkun will win the next rated artist at the next HEADIES awards.


Now he has signed another art to hkn gang, in a new deal that partners with DREMO's appe music that has previously managed DREMO.

DREMO had previously released some songs like "flavor" and "normal levelz".

HKN gang had a total of five artists previously, DAVIDO, b-red, sina Rambo, danagog, and deekay. So this new signings makes it 7 for HKN gang.