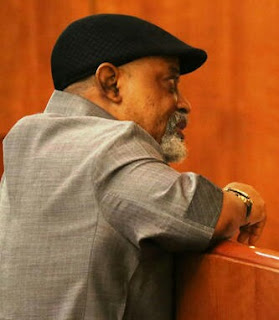 The people from the South-East region on Monday, in Enugu, booed the Minister of Labour ‎and Productivity, Chris Ngige, after he tried to defend appointments so far made by President Muhammadu Buhari.

Mr. Ngige was in the Enugu State capital to speak at the Town Hall session for the South-East region organised by the Federal Ministry of Information and Culture.

But as he spoke, he was repeatedly jeered by those in the hall who kept shouting “No no no.”


At a point the hall became uncontrollable, and it took a lot of efforts for organisers to restore order.

Some participants complained that Mr. Buhari had so far marginalised the zone in the appointments made so far.

Mr. Ngige had tried to defend President Buhari’s appointments, saying a leader must be allowed to work with people he could trust, a line of argument that sparked further jeers.

Some of those at the event expressed displeasure at the level of neglect they said the region was facing.

Among the issues raised was the ongoing forgery trial of the Deputy Senate President, Ike Ekweremadu, with the Ohanaeze Ndigbo vowing to resist any move to remove him.

Governor Ifeanyi Ugwuanyi of Enugu and other notable speakers, including Archbishop Emmanuel Chukwuma, urged the Buhari-led government to fulfill its promises to the people of the zone.

The governor said the appeal became imperative following the epileptic power supply and bad roads in the region.

He also tasked the Federal Government to make a substantial investment in the Ugwuoba Gas Field in Oji River local government area of the state.

He said, “I recall the president’s campaign promise to revive the coal mines in Enugu and utilise it to generate electricity.

“Coal is a major energy source in some countries of the world, and we have it in abundance in the state. If this is done, it will directly or indirectly create job opportunities for millions of Nigerians.”

Speaking at the event, Archbishop Chukwuma warned against the dire consequences of removing Mr. Ekweremadu.

He advised the Imo State Governor, Rochas Okorocha, and other APC members to desist from hatching any plot to oust Mr. Ekweremadu, saying such an action would jeopardize Nigeria’s unity.

On his part, the President of the Ohanaeze Youth Council, Okechukwu Isiguzoro, said “the plot by some forces within the APC to remove Ekweremadu is a very dangerous dimension.

“Ekweremadu is not a product of the South-East but the entire Senate of the Federal Republic of Nigeria.

“So, any attempt to remove him as the Deputy Senate President will be resisted by the Ohanaeze Youth Council. We will make this place very hot for any person, groups, or cabal that tried to remove Ekweremadu.

“We will match to the National Assembly straight away, occupy the place and resist any move by anybody within the government of Buhari to remove Ekweremadu. It won’t happen.”