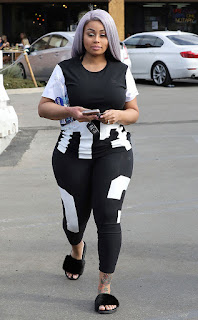 Although she is looking chubby, Blac Chyna is back on her feet and out and about since giving birth to baby girl Dream Kardashian.

The 28-year-old Rob & Chyna star was photographed at Health Nut, a health food restaurant not far from her Los Angeles home. The eatery is a favorite of fiancé Rob Kardashian's sisters and which is often featured on Keeping Up With the Kardashians.
This marked the most public sighting of Blac Chyna since Rob drove her and baby Dream home from the hospital on Nov. 12, two days after the glamour model gave birth to the child via C-section. 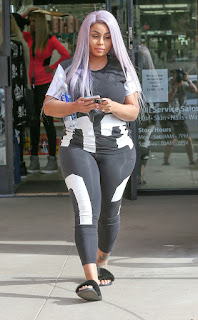 At Health Nut, she wore a black and white printed T-shirt, matching leggings and fuzzy black sandals and sported a lavender wig she recently debuted on Snapchat. She carried her iPhone and a bottle of water. Blac Chyna appeared with a friend and camera crew.
She had remained active on social media since giving birth, sharing several pics and videos of Dream. On Friday night, she posted several videos on Snapchat showing her wearing her wig, plus a black mini dress, and lip-syncing to hip-hop tracks.

Blac Chyna also showed on Snapchat has lost 18 pounds since welcoming Dream, most recently three pounds in one day. She has vowed to get back into shape and return to weighing 130 pounds, her pre-pregnancy weight.