StarBoy Records boss, WIZKID has decided to cancel all his scheduled dates of shows, events, concerts for the remaining days of December 2016 and also January 2017.


Not long after a fan drew attention to how frail Wizkid looked in a recent photo, the singer, took to social media to announce that he will be canceling all shows for December 2016 and January 2017. 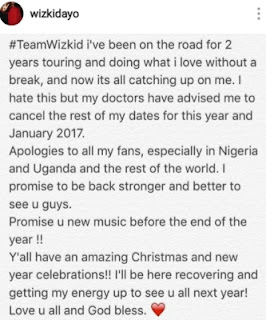 Wizkid, who has been on tour for a 2-years now, revealed the stress is definitely catching up and has been advised by his doctors, to take a break.

Some fans were left absolutely disappointed as lots of people have had their expectations up especially WizKids homecoming concert.


This has made folks on social media to even speculate that his withdrawal from his already planned dates of performance isn't exactly because of a medical condition as he claimed.

Well, its still too early to speculate hopefully more gists will unravel soonest... Keep it locked down here....