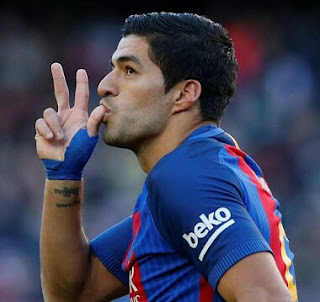 Again Luiz Suarez was the star man again for Barcelona as he scored two vital goals for his team that walloped las palmas 5 goals to nothing.


Download the complete video of the goals and highlights in MP4, mobile, desktop, HD, all devices, all formats of Barcelona's 5-0 victory against las Palmas in the Spanish LA Liga Santander 2016 / 2017 fixture.


Just the kind of game the Spanish champions needed to boost the team spirit as they ran out comfortable 5-0 winners against Las Palmas in the LA Liga early fixture.

Suarez was the star of the match as he scored two goals the first coming in the 14th minute.

Messi then scored after Las Palmas goal keeper fumbled the ball, Suarez scored his second in quick succession in the 57th minute then Arda Turan in the 59th minute.

Barcelona were on a rampage. The momentum died down a bit before Alex Vidal scored the final goal in the 80th minute.

Download Video: Barcelona vs Las Palmas 2016/ 2017 Goal and Highlights by clicking the link below