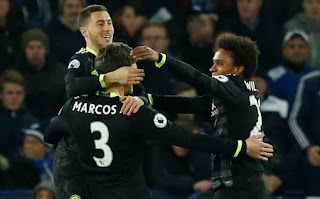 Today 14th of January 2017, Chelsea fc walloped Leicester city 3 goals to nothin, courtesy 2 goals from Marcos Alonso and a a goal from Pedro.

Download the complete video of the goals and highlights in MP4, mobile, desktop, HD, all devices, all formats of Chelsea's 0-3 victory against Leicester city in the English Premier League (EPL) 2016 / 2017 fixture.


It was a confident victory for the blues as they outclassed Leicester city all through the game. In terms of possession and chances Chelsea bossed Claudio Ranieri's charges.

Marcos Alonso scored two goals, the first was a right footed shot in the 6th minute.

The goal for followed by another from Alonso in the 51th minute with his shot coming off Morgan. Pedro found the back of the net as he headed home willian's cross which deflected off Morgan.

Download Video: Leicester City vs Chelsea 2016/ 2017 Goal and Highlights by clicking the link below.