Home » gist » MEET LOOKMAN ADEMOLA: THE BOY THAT SCORED ON HIS DEBUT AGAINST MANCHESTER CITY

MEET LOOKMAN ADEMOLA: THE BOY THAT SCORED ON HIS DEBUT AGAINST MANCHESTER CITY 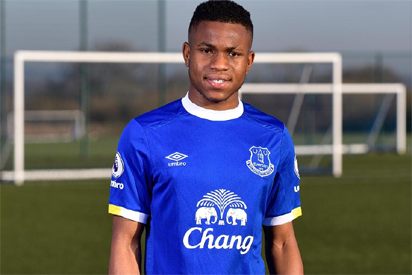 From his yoruba name, you can easily guess that he is a Nigerian, but he is an England player. Ademola Lookman is a 19-year old English winger who plays for Everton fc, a club he only joined last week.

After just one season slugging it out with the rest of the raw talent, Lookman Ademola was promoted to the Addicks’   senior side in 2015.

Lookman Ademola made his Charlton debut in November 2015, a 1-0 loss to MK Dons in which he played 35 minutes as a substitute.

The winger’s first start for the club came later that month in a 1-0 win at Birmingham.

Since then, Lookman Ademola became established as a first-team starter, celebrating his first goal on December 5 in a 3-2 loss at Brighton.


Lookman Ademola then bagged ten league goals in 45 appearances for the Addicks and will be a huge miss at Charlton.

Lookman Ademola has made appearances at England Under-19 and Under-20 level.

We Nigerians are hoping one day that the talented winger lookman Ademola will switch allegiance and decide to play for the Nigerian national team.