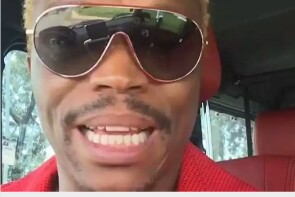 Idols SA judge Somizi Mhlongo has lashed out at churches in the country after he felt “discriminated” against at a service at Grace Bible Church on Sunday.

In a series of videos which has since gone viral‚ Somizi lambasted churches for passing judgement on gay people.


The TV and radio personality who was seething told fans that he had stormed out of church, after a visiting pastor labelled homosexuality "sinful" and "disgusting".


“I am not going to sit here and listen to someone offend me. This is who I am. I am a gay man. Get it straight into your your skull…I will remain gay for the rest of my life. Let God deal with me,” Somizi said in the video.

Somizi called on churches across the country to make their stance on gay people known.


“I would like to make a plea to churches and mine particularly because I got to Grace Bible Church.

“Say it so that we know, because we go to church to speak to our God whom I believe accepts me for who I am, whom I believe created me the way I am," he added.