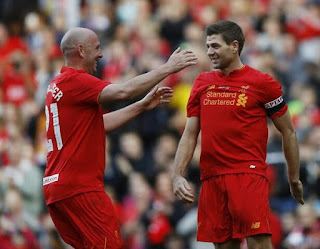 
A star-studded Liverpool legends side triumphed over Real Madrid courtesy of a match-winning Steven Gerrard volley, the goal everybody inside a packed Anfield had been hoping for.


The match promised to split up the international break by bringing some of football’s biggest names of recent decades to Merseyside, dusting off their boots to do battle in the name of charity.

With Roberto Carlos and Luis Figo on one side and Steven Gerrard and Jamie Carragher lining up on the other, in the not too distant past this would have been a Champions League game of meteoric proportions.