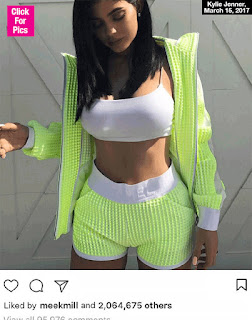 It looks like Meek Mill is taking full advantage of Kylie Jenner‘s new status as a single woman.

Nicki Minaj‘s ex has started following the Keeping Up With the Kardashians star on Instagram, and he’s been liking ALL of her pics, MediaTakeOut.com recently pointed out.


Does this mean he wants to date her? We’re not totally sure, but he’s definitely flirting with her

But would Kylie really date a man who’s turning 30 this year? Well, she has been known to like older men.

Tyga, whom she’s currently on the outs with, is eight years older than her.

As we previously told you, Kylie and Tyga split late last week. “It looks like Kylie HAS finished with Tyga, at least for now anyway,” a source close to the reality star told HollywoodLife.com


“She changes her mind like she changes her underwear though and Tyga has a habit of always managing to sneak his way back into her bed somehow.

Basically Kylie was bored with the relationship, she didn’t feel like it was going anywhere and after 18 plus months Tyga still hadn’t put a ring on it, so, you snooze, you lose. Kylie isn’t seeing anyone else, and she doesn’t think he was cheating, but she’s confident she can land herself a hotter, richer boyfriend.”
12:53:00
street ajebo
gist