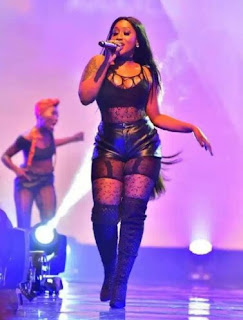 Victoria KIMANI has dropped a shocking and revealing hints that she might be leaving audu maikori's chocolate city soon.


The pretty singer revealed through an Instagram post that her introduction collection, “Safari” will be her last venture with Choc City.


American-conceived Kenyan vocalist, Victoria Kimani has lashed at Chocolate City over a contradiction verging on an absence of satisfactory support from the name.

The Afropop vocalist who made her sentiments known by means of an Instagram remark posted yesterday uncovered that “Safari”, her 2016 collection will be her last venture with the record organization.

Now bustling with anticipation, her sight now seems set on a future without the record label.

“Mann “these labels got me feelin independent!!!!” But still I keep pushing cuz greater is HE that is in me than he that is in the world.

“SAFARI is my last project with @choccitymusic …. Excited about what’s NEXT!,” she wrote.


Until now, Kimani, who signed to Choc City in the year 2012 has enjoyed a good relationship and success with the label.

The singer’s “Queen Victoria” mixtape also makes up one of the main highlights of her time with Chocolate City.