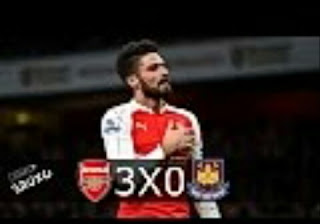 Arsene Wenger managed to pacify the angry gunners fans with a 3-0 victory over west ham.

Mesut Ozil fired back a response to his critics with a goal and an assist as Arsenal overcame a resilient West Ham 3-0 at Emirates Stadium in the Premier League.

Germany international Ozil – making his 150th Arsenal appearance – has come under fire for lacklustre displays this season and the ire aimed in his direction increased during a run the Gunners took into Wednesday’s game that had seen them win just three times in their last 10 matches in all competitions.

Ongoing speculation around the 28-year-old’s future in north London has added to the animosity he has been subjected to, but his first goal of 2017 put Arsene Wenger’s side on the path to ending a three-match winless run in the top flight.


Ozil then set up Theo Walcott to angle in the second, capping a performance that may appease sections of the support unhappy with him and Wenger.

The Frenchman was the target of a protest in which fans refused to take their seats until the 13th minute – a reference to the number of years they have gone without a Premier League title. However, the empty spaces continually filled from kick-off.

Substitute Olivier Giroud capped the win with an exquisite finish, with Arsenal now fifth following Manchester United’s draw with Everton on Tuesday, providing a much-needed boost to their Champions League ambitions as the seasons enters its final stretched.

For Slaven Bilic, however, a fifth successive defeat and seventh winless match provides further concern after he was given the vote of confidence this week.

Emiliano Martinez made his first Premier League appearance since December 2014 with Petr Cech and David Ospina out injured, and he was placed under early pressure from Manuel Lanzini and Mark Noble, though neither managed to hit the target.

Fans continually filtered to their seats from kick-off and any intentional protesters arrived in time to see Walcott drill a shot from Hector Bellerin’s cutback straight at Darren Randolph.

Arsenal kept West Ham penned back, but Danny Welbeck was unable to take full advantage, failing to connect with Alexis Sanchez’s dinked free-kick before aiming a header too close to Randolph as West Ham held firm until half-time.

The hosts needed to play with more pace and energy in order to break down the resilient visitors and they did that immediately after the restart, an excellent James Collins tackle thwarting Ozil in the box before Shkodran Mustafi drilled narrowly wide.

The breakthrough finally came in the 58th minute when Ozil’s shot from the edge of the box somehow found a way past Randolph and into the bottom-left corner.

While the West Ham goalkeeper could have done more to keep Ozil’s effort out, he raced off his line to produce a brilliant stop as Welbeck attempted to make it two in as many minutes.

Arsenal had their second in the 68th minute, though. Ozil and Sanchez combined down the left, with the former’s cutback guided inside the near post by Walcott.

Bellerin stretched to reach a Sanchez cross from the left, but sent his effort narrowly wide, while Martinez was forced into his only meaningful save by Lanzini in the 75th minute.

There was still time for Arsenal to add to their tally, with substitute Alex Oxlade-Chamberlain setting up Giroud, who replaced Welbeck in the 74th minute, to curl a fabulous finish into the top-right corner.