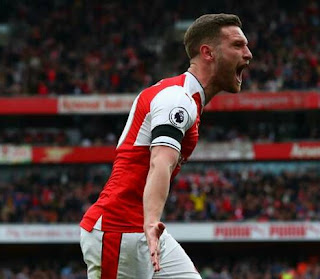 A super Sunday clash between ARSENAL vs MANCHESTER CITY ended in a 2-2 draw after a very tense and eventful show down.


Arsenal replied with an equalizer close to the end of the first half with Theo Walcott scoring on the 40th minute, the goal was assisted by Shkodran Mustafi.

Manchester took the lead again immediately with Sergio kun aguero scoring on the 42nd minute with an assist from David Silva giving pep Guardiola's team the half time lead.

The 2nd half started with the same high tempo as the 1st and arsenal defender Shkodran Mustafi this time scored for arsene Wenger's gunners on the 58th minute, the goal was assisted by mesut ozil.

Both sides continued to press but the match produced no further goals, final score at the emirates stadium 2-2.