DOWNLOAD VIDEO: BISOLA & BIG BROTHER PRANKS HER HOUSEMATES ON APRIL FOOLS DAY PRETENDING TO BE DISQUALIFIED FROM THE HOUSE 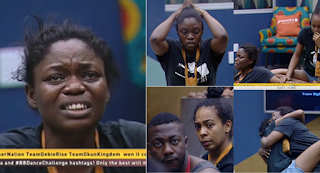 Bisola and big brother planned to prank the housemates today as it is April 1st (April fools day) and it was met with mixed feelings and emotions.


Big brother called the head of house bisola into the diary room while other housemates were busy preparing their individual food for a presentation.

In the diary room big brother and bisola together planned to prank other housemates, bisola is to pretend that she was disqualified from the big brother naija 2017 house.


Reason been that the all the housemates broke a very important rule of the game and as the head of house, bisola is to pay the ultimate price (disqualification) because the offense happened in her reign.

Tboss and her partner debby-rise appeared to be unconcerned with what has happened, tboss was spotted smirking and doing the "yinmu" sign with her nose.

Bisola continued crying while her fellow crew members tried to pacify her. Minutes later big brother ordered all housemates to gather in the living room and addressed the situation.

Big brother explained to the housemates that they had broken a rule in the house and bisola as the head of house has been disqualified to pay the price.

Housemates were beginning to feel that this might be real and were all bemused. Big brother then asked all of them to focus on the TV screen to see their supposed crime.

It was then big brother broke the news that it was all an April fools prank! Housemates then roared with laughter, tboss then said she knew from the beginning that it was all a prank and that BISOLA didn't even act it out well.

DOWNLOAD and watch the full video of the April fool prank bisola and big brother pulled on the housemates, with bisola crying and pretending to be disqualified