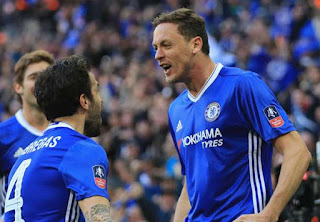 Chelsea FC today secured their place in the Emirates F.A. Cup with a 4-2 victory over fierce rivals Tottenham Hotspur in Saturday's clash on 22/04/2017.

Willian scored first for Chelsea FC with a beautiful free-kick early in the first half. Harry Kane leveled for tottenham almost immediately with a fine header.


Victor Moses went down easily in the box close to the end of the first half and Willian stepped up confidently to smash home the spot kick, giving Chelsea a 2-1 lead at half time.

Dele Alli equalized for pochettino's men to make the scores 2-2. The introduction of Cesc Fabregas and Eden Hazard immediately sparked life into the Chelsea team as Eden hazard smashed in a thunderous shot, giving Chelsea the lead again.

Nemanja Matic was the hero of the evening when he scored a beautiful outside the box stunner, sealing the victory for Antonio Conte's side as the book their place in the F.A. Cup final.

Download video of Chelsea vs Tottenham Hotspur 4-2 f.a cup semi final goals and highlights on 22/04/2017 below