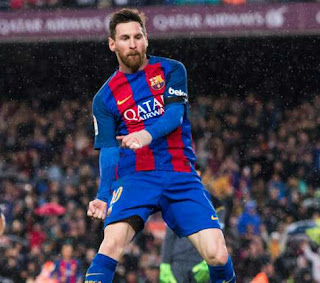 Lionel Messi was inspirational upon his
return from suspension as Barcelona cruised to a 3-0 win over Sevilla to move back above Real Madrid at LaLiga ’ s summit for a few hours at least.

The champions’ talisman missed the 4-1
defeat of Granada last time out due to an
accumulation of yellow cards , but more than made up for lost time in Wednesday ’s
resounding success at Camp Nou with a
brace and an assist .


Messi was instrumental as Barca assumed
complete control with a devastating eight -
minute spell midway through the first half ,
setting up the opener for Luis Suarez with a
trademark darting run down the right before netting twice himself.

Perhaps with their hectic April schedule in
mind, there was a noticeable let- up in
intensity from Barca in the second period , but there was never any danger of a Sevilla
comeback as their miserable record against
the Catalan giants was extended to one win
from their last 20 meetings .

The win sends Barca perhaps only
momentarily back to the top of the table , one point above Madrid , who travel to struggling Leganes later on Wednesday .

It was another damaging defeat for Sevilla ,
who had Vitolo sent off in stoppage time for
a second bookable offence and are now three points behind Atletico Madrid in the race for the third and final automatic Champions League qualification berth.

Sevilla ’ s six -match winless run in all
competitions is their worst under Jorge
Sampaoli and they almost found themselves
behind within four minutes as Messi crashed a shot against the underside of the crossbar from 20 yards with Sergio Rico motionless.