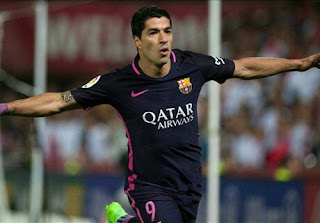 
Luiz Suarez took the lead very late in the first half (44th minute) with a beautiful goal to give FC BARCELONA the half time lead.


Jeremie Boga leveled off the score to make it 1-1 at the start of the 2nd half on the 50th minute.

Francisco Alcacer then gave FC BARCELONA the lead with a well timed goal on the 64th minute.

Granada were reduced to 10-men when Henry Agbo received his second yellow card of the match I'm quick succession.

Matthieu Saunier then compounded the problems of Granada when he scored an own goal on the 84th minute making the scoreline 1-3.

FC BARCELONA golden boy, Neymar, then put the icing on the cake with a superb goal on the 90th minute, final score 1-4 in favor of FC BARCELONA.