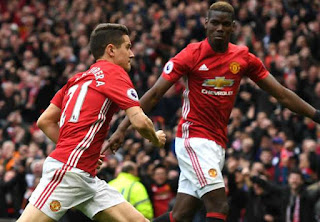 Chelsea today suffered a disappointing 2-0 defeat in the hands of manchester united in the premier league clash.


The Premier League title race was blown wide open as Ander Herrera scored one and assisted another for Marcus Rashford in Manchester United’s 2-0 win over leaders Chelsea at Old Trafford.

Chelsea’s lead over closest rivals Tottenham remains at just four points with six matches to play after Antonio Conte’s men lost for the second time in their last four games.

Jose Mourinho made four changes to his side, with Zlatan Ibrahimovic – described by the manager as “very tired” – among the players dropping to the substitutes’ bench.

But United made a fast start, Rashford putting them ahead after only seven minutes with a controversial strike after Chelsea had claimed for handball against Herrera in the build-up.

The Blues were already without the injured Thibaut Courtois before they lost an unwell Marcos Alonso in the warm-up and were struggling to make an impression before Herrera’s strike deflected in off the wing-back’s replacement, Kurt Zouma, early in the second half.

And a subdued Chelsea – 4-0 winners in the reverse fixture – could not find a way back into the game, failing to register a shot on target, as Mourinho celebrated his first victory over his former side in three attempts since his sacking last season.

The win moves United, who are now 22 league games unbeaten, up to fifth, four points behind Manchester City with a game in hand.

Rashford, starting up front alongside Jesse Lingard in Ibrahimovic’s absence, had already struck wide from a good opening before he made the early breakthrough, netting for a second league game running.

Chelsea were furious that Herrera was not penalised for an apparent handball as he intercepted Nemanja Matic’s pass and the Spain international then sent Rashford racing clear with an excellent throughball, allowing the striker to convert with a cool finish past Asmir Begovic into the far corner