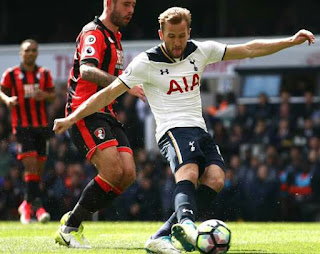 Tottenham Hotspur are really chasing Chelsea FC as they beat Bournemouth 4-0 in Saturdays early kick off on 15/04/2017.


Harry Kane was the star man in today's EPL clash between tottenham vs Bournemouth as he reached his 20th goal and has attracted a lot of praise in social media, he's trending on Twitter right now.