CHELSEA GOALKEEPER, THIBAUT COURTOIS IS THE WINNER OF 2016/2017 GOLDEN GLOVES! 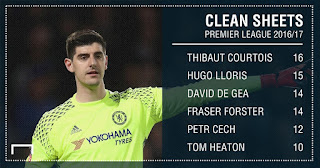 The Chelsea goalkeeper Thibaut Courtois has been confirmed as the winner of the English Premier League Golden Glove award 2016/2017.


The Belgium international has kept 16 clean sheets in the top-flight as the Blues romped to the their second title in three seasons.


Despite Antonio Conte’s side going on a run of 11 matches without a shutout during the second half of the campaign, Courtois’s superb form in the earlier part of the season has seen him secure the award.

He has also benefited from a setttled defence in front of him, with Cesar Azpilicueta, David Luiz and Gary Cahill all excelling under Conte’s tutelage.
18:54:00
street ajebo
gist, sports