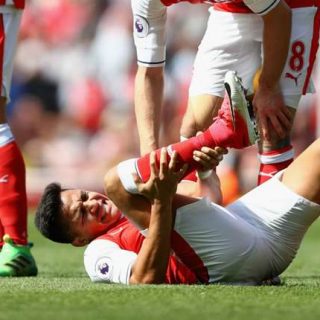 Even though Arsenal defeated Everton 3-1 on Sunday afternoon, they miss out on next year's uefa champions league for the first time in many years.

Arsenal’s 3-1 win over Everton was not enough to secure Champions League qualification and, to make matters worse, Arsene Wenger faces a potential selection crisis ahead of the FA Cup final.

Arsene Wenger could yet be without Alexis Sanchez, Laurent Koscielny and Gabriel for the FA Cup final after Sunday’s 3-1 win over Everton due to injuries and suspension.


Alexis Sanchez, Laurent Koscielny and Gabriel could all miss Saturday’s Wembley clash with Premier League champions Chelsea following a desperately disappointing day for the Gunners at Emirates Stadium, despite their victory.

Few minutes after Hector Bellerin’s early opener, Laurent Koscielny was shown a straight red card for a wild double foot sliding tackle on Enner Valencia and, after Sanchez had doubled the lead, Gabriel was taken off on a stretcher with a left knee injury after an awkward fall.

Alexis Sanchez then hobbled off midway through the second half, in what may yet prove a further blow to Arsenal’s hopes of salvaging something from their season as they face league winners, Chelsea on Saturday May 27th 2017 at the F.A CUP FINALS.