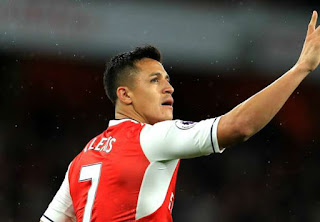 Arsenal comfortably saw off the threats of Sunderland with a convincing 2-0 victory, all thanks to Alexis Sanchez who scored a brace on Tuesday night at the emirates stadium.


Alexis Sanchez netted twice in the final 20 minutes to help Arsenal to a 2-0 Premier League win over Sunderland and keep their top-four hopes alive.

The Sunderland goalkeeper was unable to prevent Sanchez from delivering Arsenal the win, though, as the Chilean was left with an easy finish by Mesut Ozil with 18 minutes left on the clock, before adding a second in the 81st minute.

Arsenal find themselves trailing fourth-placed Liverpool by one point heading into their final game of the league season following Tuesday’s win.


A win over Everton will be enough to secure Champions League football if Liverpool lose to Middlesbrough on Sunday, while a draw could still do the trick for Arsene Wenger’s side.

Arsenal made an encouraging start and Sanchez thought he had opened the scoring in the ninth minute with a powerful shot from outside the area that took a deflection off Olivier Giroud’s arm, only for referee Roger East to rightly disallow the goal.