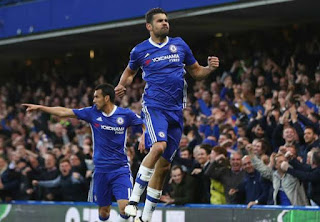 A Cesc Fabregas inspired CHELSEA see off the threat of MIDDLESBROUGH with a convincing 3-0 victory at Stamford bridge on Monday night.


Diego Costa, Marcos Alonso and Nemanja Matic were all on target as Chelsea moved a step closer to the Premier League title with a 3-0 home win over Middlesbrough, who are relegated as a result.


Chelsea will be crowned champions if they are able to win at West Brom on Friday, while Boro drop back to the Championship after a single season’s stay in the top flight.

Costa gave Chelsea a deserved lead after a dominant opening to the game, finishing off a fine pass from Cesc Fabregas, via a touch off Cesar Azpilicueta.

Within 10 minutes the Chelsea lead was doubled, Alonso stealing in at the back post to steer home his sixth league goal of the season thanks to a deflection from Brad Guzan’s thigh.

A crushing triumph extends the Blues’ series of successes against Boro to seven without conceding a single goal, as Steve Agnew’s side were unable to cope with the quality of the champions-elect.