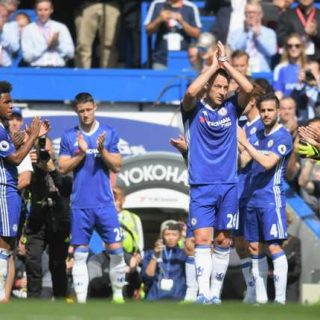 Chelsea were officially crowned champions today, winner of the English Premiership League 2016/2017 season, after they whitewashed Sunderland 5-1 at the Stamford bridge on Sunday evening (21/05/2017).

Chelsea legend, John Terry bid an emotional farewell to Stamford Bridge on Sunday, the Chelsea captain substituted on 26 minutes in his final appearance at the stadium as they capped off a title-winning Premier League campaign with a 5-1 win over relegated Sunderland.

The curtain on Terry’s Chelsea career will come down at next weekend’s FA Cup final with Arsenal, and his send-off in his last game at the London club’s home received top billing, the action on the pitch reduced to the role of an eventful sideshow.


After Chelsea called for his withdrawal on minute 26 – the number he wears on his shirt – Terry was embraced by his team-mates in the middle of the field, mounting a guard of honor for John Terry, taking in a standing ovation from the crowd and receiving a guard of honor as he left the field.

An early Sunderland opener will not have been in the script for Chelsea’s final-day party, but Javier Manquillo’s third-minute effort will be remembered as little more than a footnote after Chelsea fought back to win comfortably against the league’s bottom club.

Brazilian winger, Willian equalised in the eighth minute and, after Chelsea spurned a host of chances to make it 2-1, Eden Hazard finally did so with a fine finish in the 61st minute.

The Wearsiders had performed relatively well, but a piece of abysmal defending from Joleon Lescott allowed Pedro to add gloss to the scoreline, the former Barcelona man then turning provider for Michy Batshuayi aka BatsMan, for the first of the substitute’s late double as the champions ended the season on 93 points.