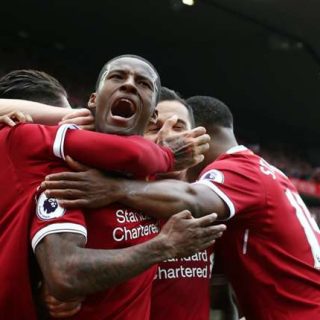 Liverpool today broke the hearts of so many arsenal fans worldwide as the secured the 4th place position (uefa champions league) with a 3-0 demolishing of MIDDLESBROUGH at the Anfield on Sunday afternoon.

With 3 goals, a clean sheet and 76 points recorded, Liverpool FC secured the fourth spot and a 50th victory reached under the reigns of Jurgen Klopp.

Gini Wijnaldum pounded his chest after lifting the nerves with an expert finish, Philippe Coutinho pointed skyward as he converted another curling free-kick, and the Liverpool manager engaged in his trademark run and leap on the touchline when Adam Lallana buried a break.


Job done at Anfield – and in style too. The Reds showed off their stunning new home kits for next season as they made their efforts in this one count with a patient then potent pummelling of Middlesbrough.

Fittingly, given Liverpool’s difficulties against deep defences, a strong finish had to be secured by solving that very issue.

The relegated visitors spent much of the encounter with a back six and, bar rare breaks through the lively Patrick Bamford, had neither the ambition nor the desire to be a nuisance in Liverpool’s box.

Their hindering approach frustrated Klopp’s side and ramped up the anxiety at Anfield, where news of early leads for Manchester City and Arsenal filtered through.