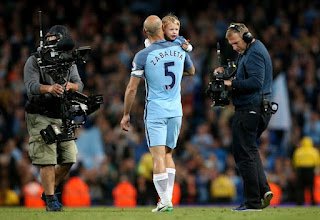 Manchester City all-but secured a top-four spot in the Premier League with a stylish 3-1 win over West Brom as the Ethiad Stadium faithful came out to honor departing club great Pablo Zabaleta.


Manchester City announced over the weekend that Zabaleta would end a nine-year spell in Manchester when his contract expires at the end of this season and Tuesday’s final home match of the campaign was soundtracked by chants paying tribute to the Argentina international.

Manager Pep Guardiola did not stay entirely on message, naming the right-back among the substitutes, but a flowing first-half performance, featuring two goals in quick succession from Gabriel Jesus and Kevin De Bruyne, headed off any potential discontent as Sergio Aguero led the line superbly.

Yaya Toure, another crowd favourite out of contract next month, got on the score-sheet before Zabaleta received a heroes’ welcome and another substitute, Hal Robson-Kanu, netted West Brom’s consolation

Only defeat at Watford on the final day for third-placed City, along with Liverpool and Arsenal enjoying significant goal difference swings in victory, can now stop Guardiola’s men from returning to the Champions League.