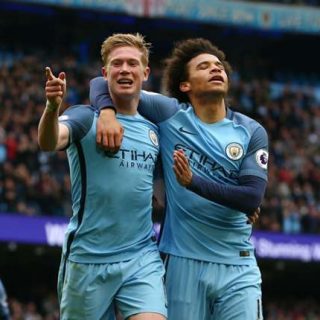 
Manchester City were totally dominant as they strengthened their case for a top-four finish with a 5-0 Premier League battering of Crystal Palace on Saturday.


Goals from David Silva, Vincent Kompany, Kevin De Bruyne, Raheem Sterling and Nicolas Otamendi were no more than City deserved as they outclassed their visitors at the Etihad Stadium.

David Silva put City in front inside two minutes despite only returning to training on Thursday, but Pep Guardiola had to wait until the early stages of the second half for Kompany to double his side’s advantage with his second goal in four matches.

The three points were in the bag when De Bruyne slotted home just short of the hour mark, with Palace’s best chance having fallen to Christian Benteke late in the opening period – Willy Caballero on hand to deny the striker with an excellent save.

Raheem Sterling added further gloss to the scoreline with his first Premier League goal since February, before Otamendi completed the rout by heading home a fifth in second-half stoppage time.

The result lifts City above Liverpool into third on goal difference, with Jurgen Klopp’s men hosting Southampton on Sunday, while Manchester United are four points back in fifth ahead of their trip to Arsenal.

Crystal Palace remain six points clear of the relegation zone but would be reeled closer to danger by wins for Hull City and Swansea City later on Saturday.

Download video of Manchester city vs Crystal palace 5-0 #epl 2017 goals and highlights below....