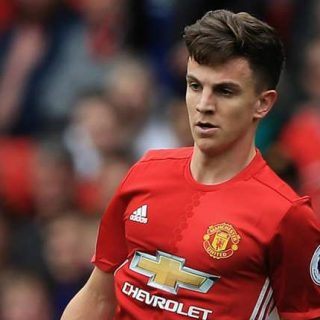 Manchester united today grabbed all 3 points against crystal palace with a 2-0 victory, despite fielding a much weaker side.

Josh Harrop scored on his debut as the youngest Manchester United side in the club’s Premier League history defeated Crystal Palace 2-0 at Old Trafford on Sunday Afternoon.

Barely 3 days before the Europa League final against Ajax, Jose Mourinho made nine changes on his 250th game as a manager in England’s top flight, with Demetri Mitchell, Harrop and substitute Angel Gomes given United debuts.


And United impressed in a first-half performance that proved enough to secure a comfortable victory prior to their season-defining trip to Stockholm.

Harrop relished opening the scoring with a fine finish after being set up by Paul Pogba, who then quickly doubled United’s lead on his return from compassionate leave following the death of his father.

Pogba and Jesse Lingard were both substituted before half-time as Mourinho took no chances ahead of an Ajax match that could give them a second major trophy of the season and seal a place in next season’s Champions League.

Palace edged a quiet second half, Christian Benteke hitting the post with a header as they failed to find a way back into the game.

Manchester United finish the 2016/2017 season sixth in the #EPL table on 69 points, while Crystal Palace dropped to 14th place with 41 points.