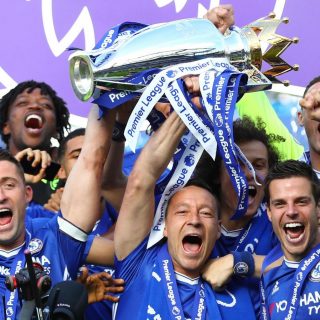 London is blue! Chelsea FC are officially the crowned champions of the English Premier League Division, download the videos of  Chelsea celebrating winning the EPL title for the 5th time! the celebrations, excitements, party and jubilation below.

Chelsea fans invaded the pitch and partied with players as Antonio Conte led the celebrations in front of the ecstatic travelling contingent.

For much of the clash with West Brom, Chelsea were frustrated and struggled to create clear-cut chances.


But with eight minutes to go, Batshuayi popped up to steal a 1-0 win with just his second goal of the season to send the visiting Blues fans wild.

Cesc Fabregas, in an X-rated interview minutes after winning the title, beamed: “Football is f**king unbelievable!”

Chelsea defender Gary Cahill was one of the first to speak after the Blues reclaimed the crown that they relinquished last season to Leicester.

He beamed: “You have to cherish these moments, you work so hard all season to be where we are. Consistently we have been the best team in the league.

There is no better feeling in football “People have written us off as a team and individually and this has shut them up. We are champions. It’s another one in the cabinet.”

Chelsea captain John Terry didn’t play a part against the Baggies but will finish his Stamford Bridge career with a Premier League winner’s medal: He said: “These boys have been on the field doing it week in week out.

It’s been a delight to sit and watch, a different perspective. “The togetherness was shown from day one.