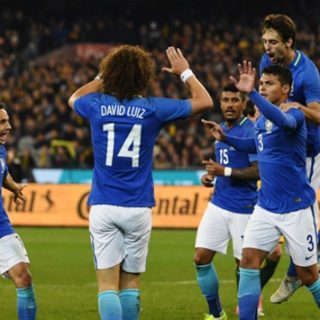 Thiago Silva grabbed the chance to redeem his image with a wonderful goal as Brazil eased to a 4-0 win away to Australia, looking confident & sharp as they build momentum heading into the Confederations Cup.

Thiago Silva was stripped of the Selecao captaincy after their 2014 World Cup capitulation and dropped altogether by Dunga following another poor showing at the Copa America a year later.

However, the Paris Saint-Germain star has enjoyed an international rebirth under Tite, wearing the captain’s armband again in their previous outing against Argentina before scoring his first Brazil goal since that 2015 Copa at the Melbourne Cricket Ground.


The centre-back’s effort followed Brazil taking the lead in the 12th second through a first international goal for Diego Souza – selected in place of the injured Gabriel Jesus – before Taison also opened his Selecao account and Souza struck again to wrap things up late on.

Socceroos coach Ange Postecoglou used the match to test several fringe players, making eight changes from their World Cup qualifying win against Saudi Arabia, but the hosts barely laid a glove on their illustrious opponents and will hope for better in Russia, where they will take on Cameroon, Germany and Chile in Group B.

The MCG was stunned into silence from kick-off as Giuliano, wearing the number 10 shirt typically donned by the rested Neymar, pounced on Mark Milligan’s slack pass and sent Souza into the penalty area to finish low to Mitchell Langerak’s right.

Australia recovered their composure and managed to turn pressure back onto the Selecao, Tim Cahill seeing a couple of close-range chances pass by before hooking a tough left-footed shot over the crossbar.

Though the tempo dropped, Brazil looked capable of cutting through the hosts at will, but Douglas Costa could not convert Souza’s pull-back and Paulinho could only scuff the Sport Recife striker’s touch into him over the crossbar.


James Troisi’s eyes lit up from 30 yards, but a tame, off-target effort was a waste with Cahill making a move into the danger area.

Brazil’s forwards were struggling to make the most of their opportunities, so defensive pair Rodrigo Caio and Silva took over to double the advantage.

David Luiz, operating in a holding midfield role, was unlucky to see his header from Philippe Coutinho’s corner hit the crossbar, but Caio kept the chance alive, nodding back across goal for Silva to bundle home inside the six-yard box.

Langerak denied Souza and Taison one-on-one before the latter finally found a way through, latching onto Paulinho’s back-heel and stroking across goal.

Stuttgart keeper Langerak made more stunning saves to deny Rodriguinho what would have been a debut goal and prevent Ajdin Hrustic scoring a spectacular own-goal on his international bow, but a chastening outing for Australia was completed when Souza headed home the resulting corner.