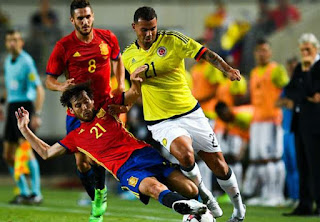 In a heated international friendly match on Wednesday, Spain drew Columbia 2-2 in Murcia, both sides were absolutely impressive.

Radamel Falcao became Colombia’s record goalscorer but it was not enough to give them a win over Spain, who had Alvaro Morata to thank.

Alvaro Morata scored a late equaliser as Spain drew 2-2 with Colombia in an engrossing friendly match in Murcia on Wednesday.


The visitors had looked set to claim the win after Edwin Cardona and Radamel Falcao put them ahead following David Silva’s opener, only for Morata’s brilliant header to rescue a draw for the home side.

The goal spared head coach Julen Lopetegui from his first defeat since succeeding Vicente del Bosque last year, although it marked the first time that Spain have conceded two goals in a home match since a 3-2 win over Ivory Coast in 2006.

A minute’s reflection was held prior to kick-off to mark the deaths of former Colombia international Marcos Coll, the ex-president of the coaching committee in Murcia, Manuel Redon, and Ignacio Echeverria, a Spanish citizen killed in the terror attack in London last Saturday.

Spain enjoyed 71 per cent of the ball but looked unlikely to stop a resurgent Colombia from claiming a third win in a row, until they were saved by an expert finish from Real Madrid man Morata, who continues to be heavily linked with Manchester United.