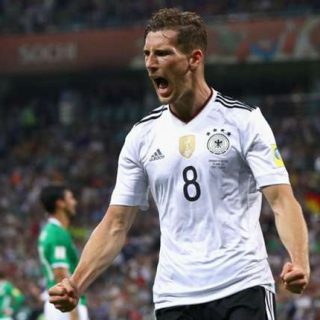 World Cup holders Germany booked their place in the Confederations Cup final after thrashing Mexico 4-1 with 2 quick first half goals from Leon Goretzka.

Schalke will be well aware that with every good performance for Germany at the Confederations Cup, Leon Goretzka is likely to slip further from their grasp. Two excellent goals in the semi-final victory over Mexico has brought his tournament total to three and alerted the watching world to his talents.


It is the 22-year-old who holds all the cards with his contract expiring next summer and a queue of top clubs headed by Bayern Munich and Arsenal ready to do business.

Schalke CEO Christian Heidel declared last week that under no circumstances would the midfielder be sold this summer but the clock is running down. It would be little risk for Bayern to allow Goretzka to see out his contract before joining for free in 2018.

That would also enable him to continue his progress at a club where the pressure is not as intense and expectations not as high on young players ahead of the World Cup.

The defending champions are competing here with a shadow squad of which Goretzka has been the one to admire most. After a slow start to his international career he has finally taken the opportunity to establish himself at this tournament.

Long regarded as one of the standout young talents in German football, Goretzka came of age for Schalke last season with consistent displays and a mercifully injury-free campaign. He has missed more than 30 per cent of all the Bundesliga games he’s been eligible for at Schalke due to various knocks, niggles, strains and illnesses. He is now playing every week and ready to kick on to the next level.

Whether or not he signs a new contract with Schalke is not yet known. They are desperate to renew and new coach Domenico Tedesco sees him as a crucial part of the club’s plans for the season ahead.

There are reports in Germany that Schalke are ready to give him a pay-rise and an exit clause for 2018, such is their fear of losing him for nothing.

Schalke have invested a lot of time and money in Goretzka and they won’t face losing him without a fight.

They have sold on plenty of promising players before – most recently in the shape of national team-mates Julian Draxler and Leroy Sane – but would dearly love some more use out of Goretzka.


He has in many ways just got going in royal blue, but the lure of Bayern is strong. A spell training with the club while he was still a young player at Bochum didn’t work out but it’s very much part of Bayern’s current modus operandi to sign up elite German talents from around the Bundesliga.

Serge Gnabry, Niklas Sule and Sebastian Rudy have all been confirmed as Bayern players this summer as the club seek to reduce the average age in the squad and cope with the retirements of Philipp Lahm and Xabi Alonso.

In another 12 months, Arturo Vidal will have turned 31 and replenishment will be needed in the midfield. Goretzka has demonstrated for Schalke that he can cover a range of midfield positions and has excelled here as a goalscorer, timing his runs and arriving just in time to find finishes.