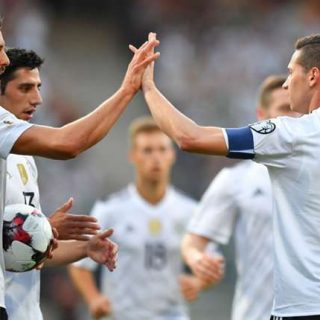 Germany yesterday thrashed San Marino 7-0 in the 2018 world cup qualifying match in Nuremberg all thanks to a proficient Sandro Wagner who scored an hat trick.

Sandro Wagner hit a hat-trick as Germany cruised to a 7-0 win over San Marino to retain their five-point lead at the top of Group C in World Cup qualifying.

Northern Ireland’s late win at Azerbaijan earlier in the day had cut the world champions’ advantage briefly, but a rampant result was never in doubt in Nuremberg.


After Julian Draxler netted the first goal, Wagner struck for the first time for his country – and then added another – before Amin Younes followed suit.

Shkodran Mustafi got in on the act, but Germany slowed the pace of the game considerably in the second period, taking their time to grab a sixth through Julian Brandt, another maiden scorer.

This young group will now head to the Confederations Cup to face much sterner tests in preparation for a defence of their World Cup crown next year, with their place in Russia another step closer.

Germany were predictably dominant from the off and Draxler broke the deadlock after 11 minutes.


The visitors failed to deal with a routine delivery from the right, the ball eventually breaking to the Paris Saint-Germain winger, who coolly curled across goal into the bottom-right corner.

And another right-wing cross, from the boot of Kimmich, soon led to the second as Wagner met the ball with a fine looping header over the desperate Elia Benedettini.

Wagner’s second international goal quickly followed his first, with the forward bundling a low effort into the net after Younes had brought down Kimmich’s crafty quick free-kick.

Younes then got his own Germany tally up and running seven minutes before half-time when Benedettini flapped at a corner and the Ajax man was left with a simple finish.

There was time for Wagner to strike the right-hand post before the break and, within two minutes of the restart, Mustafi’s scrambled strike from a corner squirmed past the goalkeeper for number five.

The next goal did not arrive for another 25 minutes, but again relied on poor defending and poor goalkeeping, Brandt left completely unmarked to nod past Benedettini.

Timo Werner headed against the upright shortly afterwards and his RB Leipzig team-mate Diego Demme was then handed a debut, while Wagner missed a glaring opportunity for his hat-trick.

He made amends in the closing stages, though, directing Kimmich’s cross in off the left-hand post to complete the scoring.