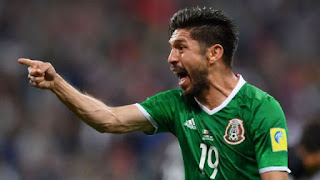 Mexico came from behind to defeat New Zealand 2-1 in a hard fought but deserved victory in the Group A clash of the 2017 confederations cup match in Russia.

Ugly scenes marred Mexico's Confederations Cup victory over New Zealand as Oribe Peralta got his side out of jail at Sochi's Fisht Olympic Stadium.

Players from both sides became involved in an unseemly melee deep into injury time after Mexico skipper Diego Reyes dragged back Michael Boxall, who then lunged at substitute Hector Herrera.


Gambian referee Bakary Gassama reviewed the incident before remarkably issuing only yellow cards to all three players involved in the initial clashes, but no more.

The Mexicans, who saw Ryan Thomas denied an 85th-minute equaliser by the woodwork, survived a major scare after Chris Wood had fired the Kiwis into a half-time lead and then squandered a series of further chances before Raul Jimenez and Peralta spared their blushes.

Manager Juan Carlos Osorio made eight changes to the side which drew 2-2 with Portugal on Sunday, but saw his understudies fluff their lines in a poor first-half display.

Tommy Smith might have nudged the Kiwis ahead with just 10 minutes gone when he only just failed too make the most of fellow defender Boxall's header down with the Mexicans struggling to cope at set-pieces.

Giovani dos Santos could have eased the nerves three minutes later when he was picked out in front of goal, but he headed wastefully wide.

Smith tested goalkeeper Alfredo Talavera with a firm header, but it was Wood who was causing most of the problems, and Osorio was grateful to his goalkeeper for denying the Leeds striker one-on-one after he made the most of injured defender Carlos Salcedo's misfortune, much to Osorio's fury.

But it was Wood who finally broke the deadlock three minutes before the break when midfielder Clayton Lewis turned the ball around the corner to put him through on goal, and he finished expertly to give New Zealand a shock lead.


Osorio sent on midfielder Herrera at the break and his side perhaps should have been level within four minutes when Javier Aquino's shot from a tight angle was well saved by Stefan Marinovic and Giovani blazed over from the loose ball.

Wood passed up another glorious opportunity when he got in behind the Mexican defence once again four minutes later, and he was made to pay within seconds when Jimenez smashed an equaliser past Marinovic.

But they finally got their noses in front with 18 minutes remaining when Peralta swept home Aquino's astute pull-back, although substitute Rafael Marquez was fortunate to escape a red card for an ugly challenge seconds later.

Mexico's luck held five minutes from time when Thomas' piledriver crashed against the bar and ran to safety before the red mists descended.