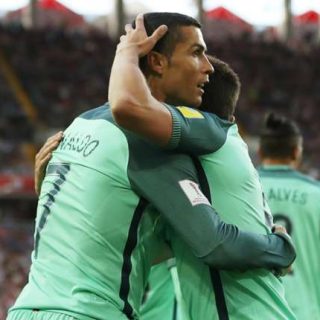 Cristiano Ronaldo proved again why he is regarded the best player in the world as he scored the only goal of the match to give Portugal a well deserved victory over hosts nation Russia in the Group A clash of the Confederation cup 2017 match yesterday.

Portugal went top of Group A at the Confederations Cup following a 1-0 win over Russia on Wednesday, Cristiano Ronaldo making the difference for the European champions.

The Real Madrid star found the net after just eight minutes, beating goalkeeper Igor Akinfeev with a strong header from close range, and Stanislav Cherchesov’s side were unable to find a response.


Russia were high on confidence following their 2-0 win over New Zealand, whereas morale was somewhat low in the Portugal camp after they conceded a late equaliser in a 2-2 draw with Mexico.

It was all Portugal in Moscow, though, and Ronaldo eventually led his side to victory amid a tumultuous personal period off the pitch. The 32-year-old has been linked with a move away from Madrid following scrutiny over his tax affairs in Spain.

Portugal made an encouraging start to the game and went a goal up in the ninth minute via Ronaldo, the Real Madrid star escaping the attention of Fedor Kudriashov at the far post before heading home from close range following a fine cross from Raphael Guerreiro.