Home » gist » GOV. NYESOM WIKE SACKS ALL HIS COMMISSIONERS, DISSOLVES HIS CABINET & ASKS THEM TO HANDOVER TO THEIR PERMANENT SECRETARIES

GOV. NYESOM WIKE SACKS ALL HIS COMMISSIONERS, DISSOLVES HIS CABINET & ASKS THEM TO HANDOVER TO THEIR PERMANENT SECRETARIES 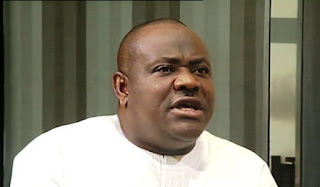 People’s Democratic Party (PDP) chieftain and Governor of Rivers State, Nyesom Wike  has relieved all his state commissioners of their duties.

Governor Nyesom Wike has dissolved his cabinet according to a statement made available yesterday, 24th of June, 2017.

A statement Saturday by his Special Assistant, Mr Simeon Nwakaudu announced the development, saying that all former Commissioners should immediately handover to their respective Permanent secretaries.

Governor Wike thanked the former commissioners for their service to the state and wished them well in their future endeavors. “, it read.

It would be recalled that Governor Rochas Okorocha of Imo State and Governor Okezie Ikpeazu of Abia State also dissolved their cabinet earlier in a manner that suggests a power rotation formula so that all quarters can be pleased in the area of political appointments.
08:36:00
street ajebo
gist