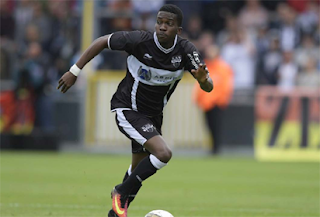 Nigeria youngster, Henry Onyekuru, is now smiling to the bank as he will receive a weekly wage of £40,000 as a player of Everton.

Onyekuru has finally ended a long-drawn transfer saga by signing a five-year contract with Everton yesterday after he passed a medical.


Everton pulled off a significant transfer coup by landing the signature of Onyekuru from Belgian outfit KAS Eupen.

The Nigerian striker finished last season as the joint leading scorer in the Belgian Super League with 22 goals in 38 games, 10 of those goals came in the final 10 games, and he has attracted the attention of a number of top clubs across Europe.

Arsenal had been leading the chase for the 20-year-old but Everton have trumped them all by negotiating a deal with Eupen that will see Onyekuru spend a season on loan with Anderlecht before coming to the Premier League.


A source close to the player revealed that he is happy with the money involved. “Henry is so happy now.

Everton will pay him £40,000 a week and Eupen get eight million Euros as the transfer fee,” the source said .

Everton feels another season spent with Anderlecht, who will be playing in the Champions League, will be significant for Onyekuru’s development and he will arrive at Goodison Park in 12 months’ time a much more polished forward.