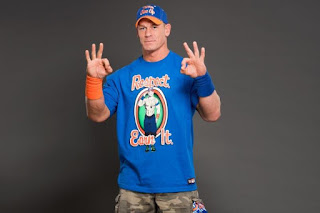 Great news for WWE lovers, WWE SmackDown appears to be poised to celebrate the Fourth of July by welcoming John Cena back into the fold.

If the blue brand's resident American superhero is indeed returning on that night, the WWE would be wise to deliver a big moment, kick off his latest tenure with a memorable match and set the table for what's to come.

John Cena has been out of action since WrestleMania 33, where he and Nikki Bella took down The Miz and Maryse.


In his absence, SmackDown has changed aplenty. Jinder Mahal now rules over the brand as the WWE champ. Breezango has become the show's most entertaining act. And Kevin Owens now claims to be The Face of America as he carries the U.S. title over his shoulder.

It may not be too long before Cena steps back into that shifting landscape.

The 16-time world champ had previously teased a return via Twitter.


WWE.com published a story about the tweet, which all but confirms Cena's appearance.

Who should The Leader of the Cenation go after? What's the best way to use his star power and in-ring skills? Read on for a look at three options the WWE should have on its drawing board.

Mahal and Cena colliding is a no-brainer.

John Cena is the ultimate good guy. Mahal is supposed to be SmackDown's No. 1 villain. Cena bleeds red, white and blue. The current WWE titleholder's character is built around his Indian heritage and his anger at Americans.

And assuming Mahal is still champion by July 4, Cena seeking him out right away is the logical move as the powerhouse seeks to break Ric Flair's record of 16 world title reigns.


Fans have good reason to believe Cena will play the conqueror in that scenario, as he's taken down his fair share of foreign baddies in the past. Brandon Gnetz of PopCulture.com is among those with an inkling that the mix of Independence Day and the patriotic babyface's return will spell Mahal's doom:

Imagine if Mahal took on Cena but came away victorious. Suddenly, The Maharajah would increase his stock of momentum and come off as a more powerful champion.

John Cena would likely give Mahal one of his best matches to date. And there are few things in the WWE world more beneficial than a clean win over the indomitable Cena.

The loss would give Cena some direction moving forward.

His rivals can sell his failure as a result of him not being around full-time anymore. He can talk about losing his way and needing to regain his focus.

Then Cena can earn his way back up to title contention with his next feud.

Breezango's bizarre world would be quite the intriguing place to send Cena temporarily.

Tyler Breeze and Fandango's fashion police segments have been one of the highlights of SmackDown in recent weeks. They have embraced the absurd as the duo has donned disguises, critiqued the roster's attire and played mock policemen.

It would be great to see Fandango and The King of Cuteville tear Cena apart for his jorts and Gatorade-bright T-shirts. And seeing him wander into Breezango's "headquarters" with his face contorted by confusion would be hilarious.


An appearance from Cena would help legitimize Breezango, making them seem like a bigger deal with the added star power to their skit. That's quite the step up from namedropping The Colons.

This wouldn't be a long-term situation, just a fun moment to go along with whatever match he has on his schedule.

Should Owens still be U.S. champ by the time July 4 rolls around, him calling out the roster would be the perfect opportunity to bring back Cena in memorable fashion. KO could challenge anyone and everyone, and after a long pause, Cena's music would hit.

There would be something poetic about Cena answering an open challenge for the United States Championship after issuing so many himself in 2015.

Plus, the two would put on a hell of a show.

Their clashes during Owens' first year on the main roster were electric. Hall of Famer announcer Jim Ross noted on his blog that he loved Cena and Owens' battle at Money in the Bank 2015. He wrote of the bout:

"Both men busted their ass to deliver, and they did."

They could do that once more, kicking off Cena's return with great action and high stakes.

This would leave the door open for the WWE to step up what Cena will be doing for the rest of the year. Whoever his next rival will be could storm into the contest and ruin Cena's chances at dethroning Owens. Boom. A feud is born.

That would be a hell of an opportunity for Baron Corbin, a rising star who needs a high-profile feud to continue his climb to SmackDown's top tier.