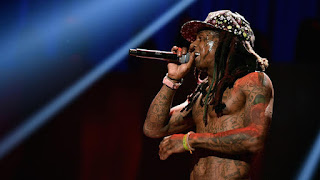 Tucked behind tall hedges, the glass-and-steel spread has nine bedrooms and 10 bathrooms that include a two-story master suite accessed by a glass-enclosed elevator.


In the living room, a three-story wall of windows takes in waterway views. Multiple kitchens, a media room and a professional recording studio are among other features.


A month earlier, police had swarmed the house following a hoax call claiming four people had been shot there, which played a part in the rapper’s escalated desire to sell, TMZ says.

Weezy, whose real name is Dwayne Michael Carter Jr., purchased the home in 2011 for $11.6
million.