NIGER DELTA MILITANTS GIVE NORTHERNERS ULTIMATUM TO LEAVE THE SOUTH-SOUTH 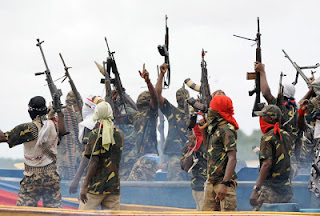 Rising form an extra-ordinary meeting in Port Harcourt, Rivers state yesterday, said failure to do so, they would attack all the oil wells in the region that are owned by northerners.

The group berated the Federal government for holding peace talks with the Northern leaders despite the hate speeches emanating from the youths of the region in recent times.

They demanded that all oil wells owned by Northerners be returned to people from the Niger Delta region.


The militants also threatened that all oil and gas companies operating in oil wells illegally owned by northerners should vacate such blocs, wells and platforms before October 1, 2017.

They also added that they would be declaring the Niger Delta Republic on October 1st. The statement released by the group reads in part;

“We condemn in totality the meeting held by the Acting President with some northern elders and youths. We see it as a grand conspiracy.

A responsible government should have arrested those traitors, but our government rather turned round to meet with them and pleaded for peace.

Does the Nigerian government see people from other zones as second-class citizens? Why are they more important to the Acting President, why is it that the Nigerian law is always weak when it involves the northerners?

We are still watching the unfolding events with keen interest. We want to sound this as a warning to all the northerners living in Niger Delta to quit our land before October 1, 2017 as this is not just a threat.


After October 1, 2017, any northerner found within the Republic of Niger Delta shall be seen as an intruder and shall be treated as such.

We also use this opportunity to advise oil & gas companies in our territory to shut down further operations, PENGASSAN and NUPENG to warn/withdraw their members from Niger Delta before October 1, 2017 or risk their lives. Our next action will surprise you”