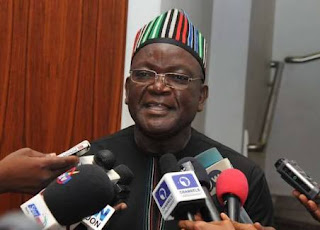 The Benue State government has denied the reports alleging that the consignments containing snakes intercepted by the Nigeria Customs in Calabar belongs to Governor Samuel Ortom.

It described it as another desperate smear campaign by members of the opposition.


Chief Press Secretary to the Governor, Mr Terver Akase Mr Akase said the report published on social media by some opposition elements had once more brought to the fore the sponsored publications to attack the person of the Governor in order to distract him from continued delivery of good governance to the people of the state.

According to him, the original report on the interception of the consignments‎ did not name the owner of the containers.

“That report on the intercepted consignments in Calabar which was skewed and published on facebook by opposition members in Benue State is proof that most of these young men who call themselves opposition on social media are bereft of any idea to help develop their state.

“The cacophony of ridiculous lies they posted claiming that Governor Ortom is the owner of the intercepted consignments is not only false; it is also shameful”, the CPS stated.


Mr Akase said Governor Ortom “has led a revolution in agriculture with numerous initiatives to make the state live the true meaning of its status as the food basket of the nation since he assumed the leadership of Benue State but snake farming is not part of the agriculture programme of the state.”

The Chief Press Secretary stressed that even in his private capacity, Governor Ortom does not own a snake farm and will never encourage anyone to go into the business.


My question is not even who brought in the snakes but how many have they brought in that went undetected and what is this person intending to do with them?groom them and release them into the streets?
20:09:00
street ajebo
gist