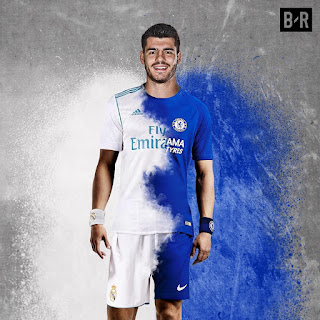 Chelsea FC are on the verge of bolstering their attack for their Premier League title defense after agreeing a club record deal worth an initial £58m with Real Madrid to sign the Spain forward Álvaro Morata.

Discussions have been ongoing with Madrid since Chelsea lost out on their first-choice, Romelu Lukaku, to Manchester United, with a breakthrough achieved on Wednesday.


Manchester United have paid an initial £75m to Everton for the Belgian. Chelsea’s fee for Morata eclipses the £50m they gave Liverpool for Fernando Torres in 2011 and could rise to £70m with achievable add-ons.

“The move is now subject to him agreeing personal terms and passing a medical,” Chelsea said in a statement confirming the clubs had reached a deal.

Wages are not expected to prove an issue, with Morata in line to earn around £150,000 a week on a five-year contract.

He is in the United States with the rest of Zinedine Zidane’s first-team squad and must travel to England for a medical.

It is a significant fillip for Chelsea after a frustrating summer in the transfer market. Conte, whose team arrived in Beijing on Wednesday morning for a three-game tour, signed a new two-year contract on Tuesday which has established him as the best-paid head coach in Chelsea’s history at around £9.6m a season.

Yet, with Diego Costa out of favour and in talks to return to Atlético Madrid, Conte’s only senior strikers in his squad are Michy Batshuayi, a bit-part player last term, and Loïc Rémy, who spent last year at Crystal Palace and has entered the final year of his contract. The France international is available for transfer.

The club consider Conte partly culpable for that state of flux up front after he chose to text Costa and inform him he has no part to play at Chelsea.

However, having missed out on Lukaku, the Italian had urged the board to prioritise the signing of Morata, a player Conte feels can lead the line effectively in the Premier League and Champions League.


The manager has long been an admirer of the 24-year-old, whom he signed for Juventus just before taking the Italy job in 2014, and there had been talks to bring him to England a year ago upon Conte’s appointment in south-west London.

Morata ultimately returned to Madrid, his hometown club, after they activated a buy-back clause and secured him for £23m.

“Various Premier League coaches called to tell me to play for them,” the Spaniard told the Guardian in April .

“I said yeah, I’d like to, that if I had to leave I would almost certainly go to London, but that I didn’t know what Madrid would do.

I knew they’d bring me back but I didn’t know if it was to keep me or sell me. I spoke directly to Mauricio Pochettino and Antonio Conte ... I remember talking to my dad then and him saying: ‘This guy’s [Conte] going to win the league there.’”

He went on to score 15 goals in 26 appearances in La Liga last term, the most prolific spell of his career, but made clear this summer he would be willing to move on in search of more regular first-team football after spending the year behind Cristiano Ronaldo and Gareth Bale in the pecking order at the Bernabéu. That chance will come at Chelsea, though his initial suitors had been Manchester United.

Madrid confirmed the agreement with Chelsea and said in a statement: “The club wishes to express its thanks for the dedication, professionalism and exemplary conduct displayed by the player over the years, spanning his time in our academy right through to his spell as a member of the first-team squad.”


He would become the club’s third significant signing of the summer, with the Germany defender Antonio Rüdiger potentially to link up with his new team-mates on the Singapore leg of the tour having been granted time off after his participation in the Confederations Cup.

Tiemoué Bakayoko, secured from Monaco, is recovering from minor knee surgery and has remained at Cobham with Eden Hazard as the pair continue their rehabilitation.

Chelsea’s pursuit of Real’s right-back Danilo is likely to be thwarted by Manchester City and talks continue with Juve over the Brazil wing-back Alex Sandro regarding a potential £60m transfer.

Juventus are resistant to the move and are willing to offer the player a new contract, though their interest in Nemanja Matic, who will be permitted to leave Chelsea and has not been included in Conte’s touring party, could yet see agreement reached.
07:23:00
street ajebo
gist, sports