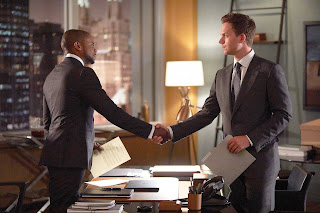 Download suits season 7 episode 3 'mudmare' for free below. We’re three episodes into the new season and there’s already reason to believe PSL might not survive without Jessica at the helm.

Alex joining the firm creates some expected and unexpected drama that threatens several core relationship at the firm.

Meanwhile, Rachel and Donna butt heads over the associates. It’s a very weird episode that I think tries to do too much, and it ends on a jarring, even weirder note.

“Mudmare” begins with Louis having a mudding-themed nightmare: Harvey finally agrees to go mudding with him only for their bro-date to be interrupted by Alex, who insists on taking Louis’ place in the mud bath.

Obviously, Louis is still concerned that Alex joining the firm will threaten his friendship with Harvey.

Dr. Lipschitz, his therapist, tells Louis to calm down and to view Alex’s arrival as an opportunity to make a new friend.

So, Louis fights against his nature and welcomes Alex to the office with a honeysuckle plant. It turns out Alex is actually a perfect potential friend for Louis: He admires Louis’ casework and, most importantly, he’s also a cat person, and not even Harvey’s mockery will change that. Louis and Alex hit it off, so Louis invites him to lunch, and Alex agrees.