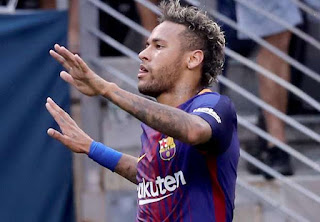 Neymar stole the show as a dominant Barcelona recorded a 2-1 win over Juventus at the International Champions Cup on Saturday.

Linked with a move to Paris Saint-Germain, Neymar only needed 45 minutes at MetLife Stadium to once again show what he is capable of.


The Brazil international scored a first-half brace, a neat finish followed by a spectacular individual goal in New Jersey.

Neymar dribbled past five Juve markers before finishing for his second goal as Barca dominated in Ernesto Valverde’s first game in charge.

Lionel Messi was also typically impressive, but he had to play second fiddle to Neymar before Barca played a different XI in the second half.

Juve were much-improved after the break and managed to pull a goal back through Giorgio Chiellini.

In action for the first time since their Champions League final loss, Juve handed debuts to Rodrigo Bentancur, Douglas Costa, Mattia De Sciglio and Wojciech Szczesny, although the latter trio did not start.

Barcelona made an energetic start, pushing Juve back from the outset as Neymar and Messi both squandered chances from free-kicks.

Neymar was lively down the left and he opened the scoring in the 15th minute.

The Brazil star received a pass from Messi before playing a one-two with Paco Alcacer, holding off Stephan Lichtsteiner and finishing into the top corner.