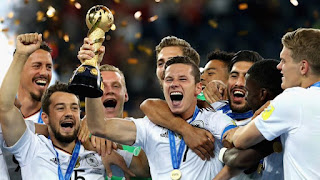 Germany’s new generation confirmed their status as a future force to be reckoned with by beating a seasoned Chile 1-0 to win the Confederations Cup final in Russia on Sunday.

Lars Stindl’s first-half goal following a costly error from Marcelo Diaz came against the run of play and proved decisive for the world champions at St Petersburg’s Krestovsky Stadium, where Chile failed to force an equaliser during a tight second period.


A first triumph for Germany in the competition, which traditionally serves as a dress rehearsal for the subsequent year’s World Cup, is a testament to Joachim Low’s ingenuity in selecting a team of hungry youngsters with something to prove, and may leave many members of the established first team facing a tough battle to retain their place in the squad at 2018’s main event.

The result will come as a disappointment to Copa America holders Chile, who should have had enough guile and experience to come away with the trophy against a young team who struggled to match them in a 1-1 group stage draw.

The attention of coach Juan Antonio Pizzi now turns to CONMEBOL World Cup qualifying, in which Chile are fourth, one point ahead of Argentina, as they seek to ensure they return to Russia on the big stage in 11 months’ time.

A rampant Chile dominated the opening exchanges, with Antonio Rudiger required to deny Charles Aranguiz inside the area in the fifth minute and Marc-Andre ter Stegen keeping out Arturo Vidal’s follow-up effort.