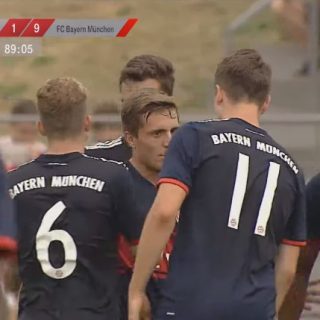 FC Bayern oozed class at times in their second friendly of preseason, a meeting with FSV Erlangen-Bruck in Herzogenaurach that ended 1-9 in favour of Bayern Munich on Sunday.

Bayern Munich ended up 9-1 winners and thrilled the good-sized crowd with slick passing and finishing. Franck Evina (2), Marco Friedl and Kingsley Coman (2) made it 5-0 at the break, with Michael Strein, Marco Hingerl (2) and Raphael Obermair on target in the second half. Mario Foth netted FSV’s consolation goal five minutes from time.


The fifth-tier amateurs began courageously and twice won possession on the halfway line before launching pacy counter-attacks, although both moves were snuffed out 20 yards from the FCB goal.

The German champions took control after that, as a team including big-name pros Mats Hummels, Javi Martinez, Juan Bernat, Friedl, Coman and Thomas Müller controlled the ball with ease and began creating chances.

Evina tapped home the opener on 16 minutes after unselfish build-up play from Müller, before Friedl kept his cool in a goalmouth scramble three minutes later to double the advantage.

Evina completed his personal double with a 27th-minute header, before Coman too helped himself to a brace, first latching onto a defence-splitting Timothy Tillman pass on the half-hour and then rattling off a powerful shot from distance four minutes before the interval.

Despite a raft of half-time changes the Bundesliga giants continued to pass and move with immense fluency, Strein finishing off a flowing move with the sixth goal in the 53rd minute.

Bayern made productive use of the flanks all afternoon and wide man Derrick Köhn provided a textbook cross for Hingerl to net in the 79th minute.


Obermair made it eight just four minutes later, before Foth had the home faithful in raptures in the 85th minute, keeping his cool as he latched onto a long ball before tucking away the consolation effort.

However, Hingerl was not to have his thunder stolen and scored his second and his team’s ninth on the final whistle.

As of Monday, boss Carlo Ancelotti welcomes back most of his current international players from vacation.

The expanded squad including the likes of David Alaba, Robert Lewandowski & Co will take up preparations for the Telekom Cup in Mönchengladbach on Saturday 15 July.

The annual tournament will be the champions’ final semi-competitive test prior to their Sunday evening departure for the Audi Summer Tour 2017 in China and Singapore from 16-28 July.