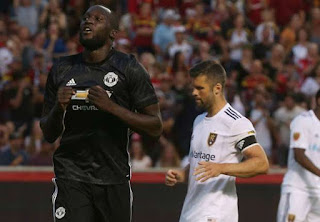 A £75million signing from Everton, Lukaku debuted in the 5-2 victory against LA Galaxy last week, but the Belgium striker opened his account in Salt Lake on Monday.

Henrikh Mkhitaryan slotted the ball across to Lukaku, who saw off two defenders and rounded the goalkeeper before steadying himself and firing a 39th-minute strike into the net.

It was not all smooth sailing for United, who had substitute Antonio Valencia sent off with 22 minutes remaining after RSL put Jose Mourinho’s men on the backfoot for much of the first half at Rio Tinto Stadium.
Phil Jones and United struggled to cope with RSL’s pace as Luis Silva gave the hosts a surprise 23rd-minute lead, but Mkhitaryan restored parity six minutes later and the Armenian star turned provider for Lukaku before half-time.

United reverted to a back four for in Salt Lake, after deploying a 3-5-2 formation against the Galaxy. New signing Victor Lindelof came into the starting XI to partner Jones – who retained his position – as Timothy Fosu-Mensah and Daley Blind occupied the full-back positions. Joel Pereira replaced goalkeeper David de Gea, while Paul Pogba, Lukaku and Mkhitaryan were included in the line-up.

Aside from Scott McTominay’s early attempt, which flashed just wide of the post, it was a difficult start for United. Led by Silva and Joao Plata, RSL’s pace down the flanks caused problems, with young keeper Pereira kept busy.

If not for Jesse Lingard’s goal-saving tackle, it would have been 1-0 RSL after the United attacker thwarted Plata just as he was about to slot the ball past Pereira in the 19th minute.

RSL – ninth in the 11-team Western Conference and four points adrift of the MLS play-off positions – did get the goal they deserved four minutes later, when a perfectly-weighted through ball found Silva, who outpaced Jones with ease and poked the ball beyond Pereira.

That sparked United into action as Mkhitaryan equalised just shy of the half-hour mark. Lukaku linked up with Lingard and the Englishman played a neat one-two before teeing up Mkhitaryan for the finish.

Jones and his partners in defence were provided some relief when RSL replaced their entire XI after 30 minutes.

And United benefited from the wholesale changes six minutes before the break – Lukaku breaking the offside trap, beating two defenders, rounding Rimando and firing the ball into the net.