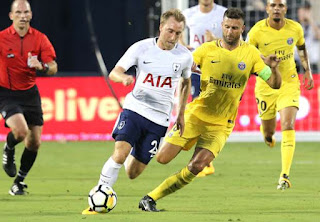 Christian Eriksen and Toby Alderweireld scored long-range stunners to see Tottenham to an entertaining 4-2 win over Paris Saint-Germain on Saturday.

The second half was quieter, with Spurs winning thanks to Alderweireld and a Harry Kane penalty after playing against 10 men following Trapp’s sending off.

While this marked PSG’s second game at the ICC, it was Spurs’ first match in almost two months, but both teams played with plenty of energy.

PSG started brightly and Cavani headed wide after just 30 seconds, but his second chance would be the opening goal.

The Ligue 1 giants broke well down the left, Adrien Rabiot bursting in behind before crossing for Cavani to apply a side-footed finish.