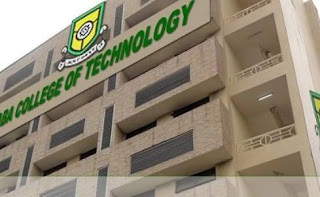 In Nigeria today, polytechnics are being sought after these days due to the fact that students have come to understand that quality education can be gotten there as opposed to the earlier notion that universities are a do or not die.


The Joint Admissions and Matriculation Board (JAMB) interestingly receives millions of applications each year for admission into polytechnics these days because no youth wants to sit at home while their colleagues are gaining admission into schools and making academic progress in the process.

In the following paragraphs, we have given a detailed list of best polytechnics in Nigeria in 2017.

This citadel of learning is situated in Edo state, Nigeria. Auchi polytechnic has produced many top Nigerian scientists, and the school has is a winner of several national competitions.

Auchi Poly won the Polytechnic Expo in 2008, and in 2012 it came first in the best designs and fabrications. It was also awarded at the Minna exhibition for its crafts and woodworks.

The polytechnic was established in 1963 by the Edo State Government and in 1994, it was taken over by the Federal Government of Nigeria.

Auchi Poly is regarded as the best polytechnic in Nigeria. It has seven schools which houses several departments.

Yaba College of Technology is situated in Yaba, Lagos State. It is popularly known as YABATECH and it was established in 1947.

The two programmes are run in conjunction with the University of Nigeria, Nsukka and the Federal University of Technology, Akure.

You can also opt for a part-time study if you won’t be chanced to be a full-time student.
The majority of YABATECH lecturers are leading professors in different fields.

Students go through the required training and graduate as well-rounded individuals armed with the necessary skills to make a it in their chosen fields.

The school is touted to have outstanding lecturers who mould young individuals into bright personalities.

The Polytechnic, Ibadan is also known as POLYIBADAN. The main campus of this school is located just beside the University of Ibadan, UI.

Both tertiary institutions actually share a common gate. POLYIBADAN had four other satellite campuses and they now stand on their own, having evolved into standalone polytechnics.

The polytechnic was originally created in 1970 as a successor to the Technical College, Ibadan. Since 1975 it has been operating on a faculty system.

LASPOTECH has several schools to study at and they include Agriculture, Engineering, Management and Business Studies, Pure and Applied Sciences, etc.

The Osun state polytechnic was second to Auchi polytechnic in the past but has lost that position now. Nevertheless, it is still rated high amongst others.

The institution is located in Iree, and was formerly a satellite campus of the polytechnic, Ibadan. It became an autonomous institution on the 12th of October 1992. It also has a daily part time program which it runs at its Koko campus.

The polytechnic has seven faculties which contains several departments from which one can choose a desired course of study- Information and Communication, Engineering, Financial Studies, Environmental Studies, Management Studies, Basic Sciences, and Sciences.

This polytechnic has modern infrastructures which support students’ academic progress. It also has a modern library and a students’ office where students can find answers to questions regarding their academic lives. It is situated in Ilaro, Ogun State.

The Imo state polytechnic was established in 1978 as Michael Okpara College of Agriculture. However, in 2007, it was elevated to the status of Polytechnic. It is located in Umuagwo, Ohaji/Egbema LGA, Imo State.

The polytechnic provides courses, training and research in all branches of Agriculture, Management Sciences, Engineering and Food Sciences.

It has a flexible academic schedule and students who can’t study full-time can opt to go to classes during the weekends.

The federal polytechnic Oko has a rich academic atmosphere which is exciting and exhilarating at the same time. It was approved by the Anambra State Government as a College of Arts and Science in 1979 and was upgraded to a College of Arts, Science and Technology in June, 1980.

It got approved as a federal polytechnic in 1993.
The polytechnic has a main campus at Oko and there are two other campuses at Ufuma and Atani. The school has a vibrant social life too. There are 8 schools from which to choose a course of study from.

It was established in 1956. There are 5 colleges from which to choose a course of study.

The above are the top 10 Polytechnics we have in Nigeria in 2017.