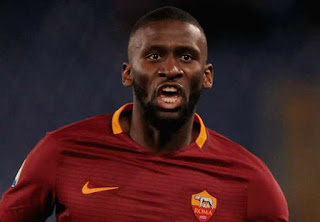 Chelsea FC have completed the signing of Germany International Antonio Rudiger from AS Roma for a reported £34 million.

The centre-back had been linked with a move to Stamford Bridge last year and the Blues reignited their interest this summer, agreeing a fee with the Serie A side last week.


He has signed a five-year deal with the Premier League champions, and will wear the No.2 shirt that was vacated by Branislav Ivanovic following his sale to Zenit in January.

Rudiger spent two seasons at Roma after joining from Stuttgart, and made 26 Serie A appearances in 2016-17 as they finished second to Juventus, and he has now signed a five-year deal at the Blues.

He had been contracted to Roma until 2020, but has opted for a switch to the Premier League, becoming the Blues’s second summer signing following the arrival of goalkeeper Willy Caballero.

“It’s a great feeling because not every player has the opportunity to join a huge club like this,” he told the club’s official website.

“I am looking forward to meeting up with my new team-mates and I’m very proud to officially become a Chelsea player.”


The 24-year-old adds to Antonio Conte’s defensive options after the departure of John Terry, now with Aston Villa, and Nathan Ake, sold to Bournemouth for £20m.

Part of Germany’s Confederations Cup winning team, Rudiger has made 17 appearances for the national team.